My experience of reading Wilde Lake was a mixed one. I adored the first hundred pages, and I even went to so far to tell people to read it on the basis of the beginning alone. It’s so specific about growing up in a planned suburb in the 1970s that I  was fascinated. Now that I’m finished, there’s so much that bothers me about it, and it mainly has to do with the two main pleasures I look for in a crime novel: there’s some clarity about what happened, or there’s a thrilling chase or setpiece or two that keeps me interested. I think the openness of the ending, which wasn’t a total openness, to be fair, was what bothered me the most.

The Laura Lippman standalones I’ve read tend to deal with past timelines being uncovered in the present. Wilde Lake is no different: the intersecting timelines circle around Lu Brant, the first female state’s attorney in Howard County who prosecutes her first murder case as an elected official. The past storyline involves her older brother who accidentally killed someone when he was a teenager and when their father was state’s attorney. Lu is 10 years old in the bulk of the past storyline, so her memories are not reliable because of the significant passage of time.

Why I liked the beginning: the book is like an update to To Kill a Mockingbird. Lu is a tomboy, her mom is dead, her dad is a prosecutor instead of a defense attorney. She’s wily. She’s trying to figure out her dad and her much older brother. They live in Columbia MD, a suburban dream of equality and egalitarianism halfway between Baltimore and Washington DC, and the political and suburban planning theories sounded great.

But there’s not a lot of forward momentum. What I ended up feeling is that everyone was hiding sordid parts of their past, and there was no resolution for most of the characters. And it ended with Lu alone, out of a job, and a father heading towards death. I’m not sure her goal of writing down her family’s secrets for her young children would really explain her family to them. People lie, people feel guilty, and the legal system can’t expose the truth necessarily. It may be a truthful book, but it left me in an odd place. I’m not saying all crime novels need to be a bit more thriller-like or resolve more issues/ more details about a crime, but those are two things that I like in a crime novel. I’m not as up-in-arms about this ending as, say, I was bothered by In the Woods by Tana French, but I’m feeling dissatisfied.

I borrowed this book from the library.

Hush Hush is the latest installment in the Tess Monaghan PI series by Laura Lippman. Some of the characters overlap from the standalone books as well, so it feels like I’ve  been in the fictional world for quite a long time since I’ve read a huge chunk of her books. That being said, I have to say my main enjoyment of the book comes from returning to characters of whom I’m very fond.

The plot centers around a mother who was found guilty by reason of temporary insanity in the suffocation death of her daughter in a hot car ten years before the book takes place. Melisandre Dawes returns from life abroad after being in a mental institution, and she is financing a documentary about her life and her family. Her older daughters, now teenagers, are understandably conflicted about seeing their mother again. Their father has sole custody of them, and he is recently remarried with a young baby.

The storyline about the bad mother resonates with Tess because she is a mother to a three year old daughter now, and the echoes in her life as well as in the lives of other characters deepens my appreciation for the book. I was more surprised by the emotional depth of this story than I was about learning Melisandre’s story. She was a mysterious character, but she didn’t hold my interest throughout the entire story. I think this book works best for people who’ve already read books in the series. 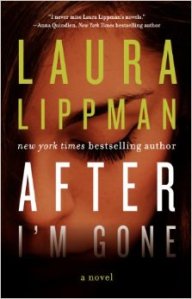 I picked up this book while I was reading great book after great book by women authors, and this one kept up the great reading streak. I’ve read over half of Lippman’s books, starting with the Tess Monaghan PI series and a few of her standalones, and I like the standalones especially. This particular novel deals with the disappearance of Felix Brewer, a gangster about to enter prison for mail fraud in 1976. He leaves behind his wife and three daughters as well as his mistress of a few years. Ten years after his disappearance, his mistress Julie goes missing, and several years after her disappearance, her remains are found in a large park in Baltimore. Sandy Sanchez, a retired homicide detective now working as a police consultant investigating cold cases, begins the investigation into the death of Julie.

First of all, this is a crime novel more in the vein of “a novel where a crime occurs,” than any sort of crime novel formula novel. Lippman spends more time building the world of Jewish mobsters in Baltimore in the 1960s and 1970s as well as the lives of the women Felix left behind than she does on the investigation itself. It’s a fascinating story, and, most importantly, the story feels lived in. Lippman is so good at what she does. The characters are sympathetic, even Felix, and that’s no small feat as well.

Some writers are must buys for me, and Lippman is a long-standing member of my list. Highly recommended.

The Power of Three is the story of three high school seniors, friends since elementary school, who are involved in a school shooting a week just before their graduation. One girl, Kat, the class valedictorian is dead, her friend Perri, a drama star is gravely wounded, and Josie the competitive cheerleader is shot in the foot. The Power of Three takes place over the course of the week between the shooting and high school graduation as the police investigate what really happened in the high school bathroom in a swanky, northern Baltimore County suburb. The official story is that Perri shot Kat and Josie and then shot herself, but, of course, that is not the truth.

The actual investigation of the crime is not the focus of this book: it’s the story of the three girls’ friendship and the world of high school girls. Lippman focuses on teenage and adult characters: the police, the school staff, the parents, and the three girls and their close friends. Lenhardt, one of the detectives, says at one point that he’s more interested in an eyewitness and physical evidence rather than motives. As a detective he’s seen lots of rationalizations or lack of rationalizations for murders. Lippman obviously disagrees because she spends the bulk of this hefty book (430 pages in my edition) telling the story of the girls and their friends. Oddly enough, she doesn’t spend much time in Kat or Perri’s heads, which is a bit of a disappointing since they are two thirds of the core group of friends involved in the shooting.

The story begins with a chapter from the perspective of Alexa, a young guidance counselor who has degrees in rhetoric and psychology and whose research focuses on rumors in schools. One thing she aims to do in her work is “allow students to express their feelings without encouraging their paranoia.” (p.180) She is the window into the girls’ worlds, and she’s in our shoes as an outsider. This book feels very much like a journalist delving into the backstory of a school shooting in an affluent town. (Lippman worked for the Baltimore Sun as a reporter for years before she became a full-time crime writer.)

It’s funny that the blurb on the front of the edition of my book talks about the wonderful pacing of the story while I actually felt it to be kind of slow. It was interesting, but it was not a book that I had to finish in a short period of time because I needed to find out what happened next. What kept my interest were the characters who are all trying to cope with the shooting. The actual explanation for the shooting is not the strong part of the story, and I think that’s intentional.  I’m as let down by the rationalizations for the shootings as Lenhardt is. I did enjoy this book, but I prefer books with a bit more plot than this one had.

I also reviewed Laura Lippman’s By a Spider’s Thread.

By a Spider’s Thread by Laura Lippman

Getting back to the Tess Monaghan series is always a treat for me:  I like prickly, solitary female P.I. characters, and I haven’t read enough of them lately.  By a Spider’s Thread involves Tess Monaghan investigating the disappearance of Natalie Rubin, a young married Orthodox Jewish woman and her three young children.  Part of the book involves Tess’s investigation and her uncomfortable relationship with Natalie’s husband Marc, the owner of a fur store, and the less successful parts of the story involve the story of Natalie and her boyfriend Zeke on the run with her children.

I think the Natalie and Zeke sections of the story falter because Lippman is keeping us in the dark about their motivations until close to the end, and that makes their sections feel a little flat.  Lippman does give us one out, and that is the sections told by Natalie’s nine year old son Isaac:  he is in our place, asking all the questions about the odd relationship between his mother and Zeke.  The mystery, however, dragged for me.

I think some other readers would criticize the book because the character of Tess falls flat for them so far into the series:  she’s still not dealing with her personal life and her emotional issues (she was seriously injured and killed someone for the first time in previous book), but I’m willing to cut Tess some slack because her story doesn’t dominate the book.  The people she interviews in the course of the investigation and her relatives and friends also figure in the book, and they seem like real, complex people.

Other readers may criticize the book because there’s a lot of telling vs. showing as Tess delves into Marc’s life as an Orthodox Jew.  I didn’t mind the expository sections so much because I felt more lectured to in books by Faye Kellerman than by this book.

Overall, this is not my favorite book in the series, which makes me happy that Lippman has written so many stand-alone novels.

Other reviews appear in Books to the Ceiling and Rhapsody in Books.