My first read of 2019 was a good one: Fugitive Colors by Margaret Maron, which is book 8 in her Sigrid Harald series. It’s a police procedural, though the first half of the book is mostly a dive into Sigrid’s grief during her leave of absence from the police force in New York. She’s a homicide detective, and her partner was an older artist who died in a car crash in California before the book began. Sigrid takes on the sole responsibility of being his executor, which puts her into contact with a variety of art dealers and artists, one of whom dies halfway through the book.

I have at least one more Maron sitting on my shelves, and I’m enthusiastic about trying her Deborah Knott series. I’d appreciate your recommendations for other Maron books to try. Happy reading to you this new year!

The most accurate blurb/ review I’ve read about American by Day is that it’s a hybrid sort of crime novel. But a hybrid of what, exactly? It’s a story about a crime, and it’s a story about a Norwegian police chief taking an unexpected trip to America. But it’s not really a thriller, and it’s not really a methodical investigation like a police procedural.  It is a book that has stayed with me, despite the fact that I’m not as fond of it as I was by the first book in this series, Norwegian by Night.

American by Day starts shortly after the shooting at the end of Norwegian by Night. Sigrid, the police chief in the first book, is still grappling with the aftermath of the first case when she finds out from her father that her older brother is missing in the United States, where he’s lived for a number of years. Sigrid reluctantly travels to the US, and the plot slows a bit, and Miller is explicit about his narrative principle when Sigrid explains her investigatory technique: “Observations first. Questions next. Interpretation last.”

And the observations are about America, race, police, and more. Sigrid’s brother is suspected of murdering his girlfriend, and African American university professor who was despondent about her young nephew’s death at the hand of the police in his backyard. Sigrid is skeptical, and eventually she uncovers the truth, and that’s the satisfying part of the read, while the sociology-of-the-US portions are the parts of the book that make me more ponderous.

American by Day by Derek Miller

I received a review copy from the publisher.

Guess what: I still really like Scandi Crime! It’s been a busy year, and I haven’t really read much crime fiction because what I was picking up was stressing me out. So I decided to dig through my wish list on my library account and picked up a Tursten novel I haven’t read yet, book 2 in the Irene Huss series. I loved reading a good, smart procedural instead of an unreliable-narrator type of crime novel that’s hard to avoid lately.

Night Rounds is the story of a ghost nurse who allegedly committed murder in a private hospital on the brink of financial disaster in Göteborg. It’s a story that involves family drama and work drama at the hospital in question so it kept me interested because the motive for the killings wasn’t obvious from the beginning. And it was nice to read a procedural that was methodical and full of interviews with a series of characters that kept my interest. And finally, it was nice to read a book with a tidy ending.

I’ve only read two other books in the series: the first installment, which is Detective Inspector Huss, and The Fire Dance. I loved the first and not the other, and I recommend this installment highly.

Night Rounds by Helene Tursten, translation by Laura A. Wideburg

Source: I checked it out from the library.

So when I stopped blogging a few months ago I started contemplating starting a booktube channel, and I think I’ll go for it soon. But first, just to get back into the blogging/book-talking in general, I’m writing this to catch up on what I’ve been reading and loving over the past few months.

I’d love to hear your reading recommendations because I’ve nearly caught up on the Spencer-Fleming series.

Allegra Goodman is on my auto-buy list. I really, really liked The Cookbook Collector about a pair of sisters in California, a bit of a taking down of dot com business culture, a bit of a love story with smart characters. I like her for the same reasons as I like Meg Wolitzer: sweeping drama, smart people, over a lengthy period of time. The Chalk Artist, unfortunately, didn’t quite work for me.

The Chalk Artist deals with a group of teenagers and a group of adults all somehow connected to Arkadia Systems, a videogame company. Goodman is so sympathetic towards her characters, and in that way it reminds me of My So-Called Life or other Herkowitz show. But I didn’t love the story because I’m not really into fantasy or video games, and while I was impressed by a couple of the scenes describing the immersive gaming-in-the-round universe of UnderWorld, I ultimately didn’t love it.

Another thing that sort of annoyed me is that the young-teacher storyline turned a bit into a teacher-as-savior story, which I loved when I was say, under 25 years old, but I don’t now.

My criticisms are because I loved other parts of the book. An intelligent take on young love was great- it’s what was missing from say, Eugenides’s The Marriage Plot. The art stuff was very cool and very vivid. The technology part was sort of cool but I felt distanced because gaming is not my thing.

The Chalk Artist by Allegra Goodman

I follow Book Expo from afar, not in any organized Armchair BEA group, but by following Twitter when I get a chance during the work week. I like reading live-tweets from interesting sounding sessions at BEA and lots of crime fiction fests. I like adding books to my list to investigate. But I don’t miss the crowds and the scrum of people scrambling for galleys. I like browsing for books, either in an actual bookstore or library or by reading blogs/social media/ whatever else strikes my fancy online: I don’t like books because I put a lot of effort into acquiring them. And how many of the people hustling for galleys actually really adore the book they scrambled to get? I’m sure some do, but the exertion seems a bit much. I’d love to see more posts in book blogs about what super-publicized books actually stuck with readers. I suspect it’s only a handful a year, if that. I’m advocating more reading, less time scrambling for books.

I lived and worked in metro Detroit for a number of years, so the memoir of a young guy moving to the city and fixing up a house was interesting just because I know the landscape. I was also drawn to the book because I’ve had some long conversations with people who are or have renovated historical homes in Detroit. It’s a tough thing to do, and it’s very different than HGTV makes home renovation appear.

Besides the subject matter making me a little leery, I was leery about trying a memoir: memoirs depend so much on the voice of the author and if I feel like he/she is leaving out lots of stuff. And I was also leery about a book that sounded like a good book or blog pitch (young guy rehabs a house he bought for $500 without foundation money). And I have to say, for the first quarter of the book, the self-righteousness was a bit much. But Drew grows up during the course of the book. And the story kept moving along because it followed his house renovation. The ending was the livable house, you know.

I liked this book, and I liked the people Philp met and befriended over the multiple years he’s been in Detroit. It’s a book that brings up lots of issues to discuss, and I don’t think that’s the case for memoirs that I would call more gimmicky than this one.

A $500 House in Detroit by Drew Philp

I haven’t been reading much fiction lately, and I especially haven’t been reading a lot of crime fiction lately: I tend to go down a rabbit hole reading the news instead, and it’s not necessarily good for my equilibrium. I was happy to get into this police procedural with a new set of characters and with a plot not nearly as gruesome as the Tony Hill- Carol Jordan series by Val McDermid.

Out of Bounds is the story of Karen Pirie, the head of the Historical Crimes Unit. She’s mourning her dead partner  Phil by burying herself in work, and she’s not a dour presence at all in the story. Score 1 for McDermid. Karen becomes involved in both a current and a historical murder investigation: a recent death of a young man whose mother died in an unsolved airplane bombing in the 1990s piques Pirie’s interest because she suspects that murder- or at least suspicious death- doesn’t run in families

What I liked most was the matter-of-factness not only of Karen but of a whole slew of highly competent women in police, social work, and forensic science. And McDermid had a damn sympathetic portrait of not one but two lawyers, for which I’m personally grateful. Also, McDermid is so good at populating this book with interesting people during the parade of investigatory interviews, etc. I hope this is the beginning of a new series.

Out of Bounds by Val McDermid 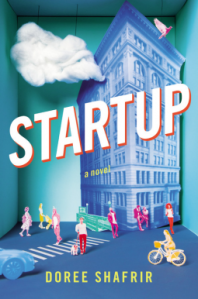 I had high hopes when I started Startup by Doree Shafrir. It starts at a ridiculous MorningRave, a “clean living dance party” populated by all sorts of denizens of New York City’s startup scene, notably Mack, the founder of an app of questionable value, and Katja, a journalist covering the tech scene. I was expecting more satire, and instead the story was more heavy with ideas and a lot of characters who were kind of despicable at times and noble at other times.

Ultimately the characters never felt quite real to me and more representative of ideas: here’s the older journalist going off about how journalism has changed in the last ten years, here’s a young woman being sexually harassed in the supposedly-enlightened company she works for: the characters seemed more like ideas than people, if that makes sense. I’ve seen reviews talking about how readable and accurate the story was, and while I read it quickly, I just felt dissatisfied by the story. It’s a book filled with sad, disconnected people who work an awful lot, and it wasn’t my thing. 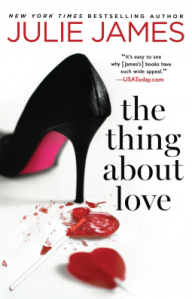 All right, Julie James is one of my favorite discoveries of 2016. I read all but her first novel in the second half of 2016, and they are appealing for their witty banter and their matter-of-factly competent female leads, most of whom are lawyers or FBI agents. The Thing About Love is about two FBI agents who meet years after a contentious training at the FBI Academy, and it’s an entertaining and dramatic story about an undercover job in the public corruption unit and their road to romance.

Julie James knows emotional beats, and that along with the dialogue makes this a really entertaining read.

The Thing About Love by Julie James

Disclosure: I received a review copy from the publisher