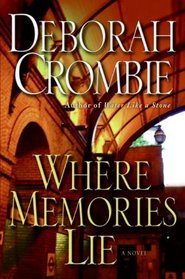 Where Memories Lie by Deborah Crombie

I don’t only review new releases on this blog because I’d miss my favorite series books or books I’ve had waiting on my shelf for a long time.  One series I’m perpetually one or two books behind on is the Gemma James/ Duncan Kincaid series by Deborah Crombie, and now that I’ve finishedWhere Memories Lie, I think I’ll fly through the next two novels so I can catch up.

Where Memories Lie begins with Gemma’s friend Erika Rosenthal approaching her about a brooch appearing in an auction catalog, a brooch she hadn’t seen since her father gave it to her before she escaped Germany before World War II.  The novel tracks the story of Erika’s husband’s murder in the early 1950’s as well as the fallout of the impending auction of the brooch.  Part of the fallout, of course, are some murders.

While I liked the murder mystery aspect of the book, I preferred getting to know more about the characters in the story.  Erika Rosenthal has appeared in at least one earlier book in the series, and I never knew her backstory.  Crombie spends lots of time with her characters, and she doesn’t feel obligated to spend most of her time in the heads of her lead investigators, which is a good way to keep a series fresh, I think.  That’s not to say that I’m not interested in the ups and downs of Gemma and Duncan’s relationship, but I’m glad their story is balanced out by the stories of the secondary characters.

Where Memories Lie is a solid police procedural with interesting characters, good pacing, and an interesting background about the goings-on in an auction house dealing with possibly-looted goods.

3 thoughts on “Where Memories Lie by Deborah Crombie”